The IT Landscape of the Logistics Industry

Today as we continue our series on the ways technology is changing the world of business, we’ll look at the logistics industry. Change in this industry may be hard to picture because of how long its most visible components — ships, trains, and semi-trucks — have remained relatively unchanged, but there is a lot more going on in the background of this industry.

Things are rapidly changing behind the scenes in logistics. The shift towards autonomy, robotics, and the Internet of Things (IoT) has already led to automated warehouses, and big names are still entering the game. (See Honeywell’s recent acquisition of automated logistics company Intelligrated.) Inventory management and tracking are also changing due to improved and more affordable RFID technology that can track shipments while they are still in a warehouse preparing for transport. Distributors are already feeling the need to catch up with the competition and replace their outdated systems. The transportation management system (TMS) market is expected to be worth $19.2 billion by 2022. 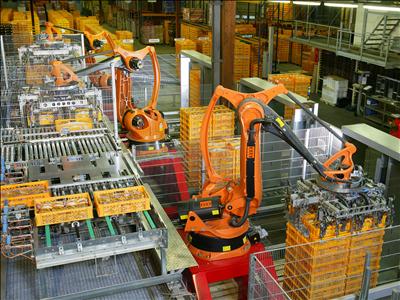 While outward-facing change may slow logistics and transport, it is indeed coming. We’ve all heard how Amazon has proposed drone delivery, but they will soon begin pilot testing their Amazon Prime Air program in the UK. The UK’s Civil Aviation Authority has agreed to let Amazon test automated deliveries using drones that fly outside the range of their operators, and it could only be a matter of time before the FAA agrees to the same tests in the U.S. Today, however, we can only imagine how drone delivery systems will affect operations and employment within the logistics industry. 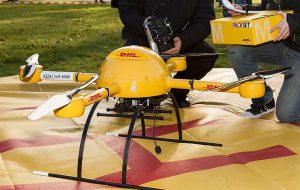 For larger shipments that have to stay on the ground (or the sea), autonomous and driverless vehicles could transform the way they are transported. This technology is already being tested around the world: the U.S. company Freightliner was recently approved to test a driverless truck in Nevada, an Australian company has automated some trucks at its mining sites, and an autonomous convoy has completed a multi-country journey in the Netherlands. At sea, Rolls-Royce is testing technology to automate cargo ships, and it hopes to introduce an autonomous shipping fleet as soon as 2020. As this technology advances, it may be the most disruptive change yet as it fundamentally alters (literally) the driving force of this industry.

Check out this video on driverless trucking fleets!

According to Research and Markets, the transportation industry’s IoT market will grow 16.9 percent from 2016 to 2020, an increase that will be largely driven by TMS automation. This increase also takes into account “revenue generated by vendors from the sales of software, hardware, cloud-based IoT solutions, smart devices, and components used in the transportation sector to construct an IoT environment.” Another big factor in IT spending in logistics is the need to develop and enhance machine-to-machine (M2M) communication, a major component of vehicle automation. To keep up with the competition and to run their businesses more efficiently, transportation providers will have to adjust their IT spending accordingly to integrate the latest technology in their systems and fleets.

As we discussed in our look at the technology landscape of the automotive industry, security is perhaps the most critical aspect of autonomous connected vehicles. Hackers have already demonstrated their ability to take control of individual cars, and in the logistics industry, a similar attack could cause deadlier accidents due to the size of the vehicles, or lead to large-scale theft if attackers are able to get a hold of the vehicle’s contents. The software, applications and connections behind autonomous cars must be secured and encrypted wherever possible.

In addition to the vehicles themselves, the applications used to automate the logistics industry as a whole must be secured. Supply chain and TMS apps will most definitely follow the trend of switching to cloud-based SaaS applications, so the cloud infrastructure used to host these apps and the data they use must be secure as well. This data will include cargo manifests, vehicle locations, financial information, customer data, and more, all of which could be invaluable in the wrong hands.

In addition to the regulations that we’ll see adopted prior to autonomous trucks on the road, the possibility of autonomous planes will trigger conversations about concerns and risks. If planes move from current autopilot options to replacing pilots entirely, even for takeoff and landing, the safety implications are even more significant than those surrounding trucks or ships.

Another area we will surely see additional regulation is the use of drones for shipping and delivery services. In the U.S., the FAA has already issued regulations on commercial drone use that won’t allow for Amazon or other companies to use drones for deliveries, but Amazon’s current testing abroad indicates other countries’ willingness to adopt regulations that will allow drone deliveries to take place. It’s a very real possibility that the FAA will issue new regulations in the future that will allow more widespread drone use with safety and security.

As all of the current self-driving vehicle and drone tests show, automation has already come to the logistics industry. Companies should stay on top of all of these trends so they are ready to become early adopters once the technology becomes mainstream. In the meantime, upgrading TMS software should be a priority — to embrace the efficiency and connectivity already available in the industry.